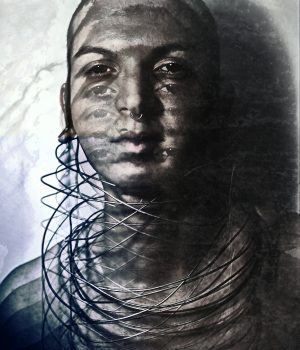 Michaela: Where does the name Candida Kandinskij come from?

Giovanni: The idea behind the name was born with the intention to create a relationship between an infection, Candida, with the name of an artist, Kandinskij. The choice to use a vaginal bacteria residing in the human body which may turns into an infection if the conditions would be favourable, is done on purpose as metaphorical symbol of the artistic energy that arises thanks to any sort of inner pain as trigger agent (the favourable conditions expressed in the physical realm) which leads to the artistic outcome as the fruit of the reworking and reshaping of this inner state.

It’s common to think about art as an expression of a certain emotions that usually are not positive and the name Candida Kandinskij wants to express this concept.

I chose Kandinskij because I felt his research on the emotional impact that his artworks have on the audience very close to my artistic investigation and aim, even if this is expressed in two different ways at the end of the day, but I felt his point of view very close to me. When I read “The spiritual in art” I thought something like “Oh, there is another guy who had similar concepts and feelings about art, music, emotions and their relationship” and this was very inspiring for me, not so much for the final outcome that I mainly expressed with PREMATURE so far, but for the personal enrichment that I got from him. 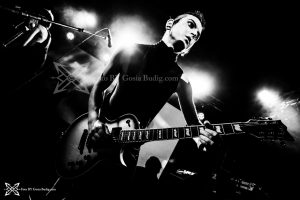 Michaela: On Premature, you played a lot of different music styles. Which one do you prefer the most?

Giovanni: I released the full-length album Premature in 2014, just before moving to Berlin. Since it was my first album, I gathered in this work all the musical influences with which I growth over the years, starting from my childhood until the album was released. So it embraces mainly industrial rock, alternative rock but also black metal in a way. It’s difficult to pick up one style as my favourite because when I play, or I mix different styles for trying to find different solutions, is for the purpose to express a certain inner state. So it is like to ask if I prefer to express certain inner state rather then one other, but each of them has been necessary to create the album in its entirety, each of them has its own role in the album, that is to narrate my inner condition of the 5 years which led to the creation of this album.

Michaela: The Premature project from 2010 was a multimedia spectacle. Photos-videos and live music. Was it all your creation ore did you work with other artist too?

Giovanni: PREMATURE in its widest form, that is the visual one, is a working progress project, it started in 2009 and it continues to evolve. Indeed, in March I presented the new PREMATURE collection 2017 – 2018 for the first time during my personal exhibition at Azimut Capital Management at my hometown Udine. Up to now, everything that concerns Candida Kandiskij has been realised by me but I am always open to collaborations with other musicians/artists.

Michaela: On Premature you played industrial, kind like Nine Inch Nails. With Vlad in Tears you play Gothic-Rock. Does it satisfy you too or do you miss the experimental part in the music?

Giovanni:Until now, the enjoyable aspect of being part of Vlad In Tears is that I’m there as a guitar player and I don’t have to take care of all the organisational and managerial things concerning the band as I already do with Candida Kandinskij. I enjoyed the band when Souls On Sale was pretty much written so I didn’t have the chance to put my creative side into the album and I think it has been good for that time because that time was not mature enough to give my contribution in this way. Maybe I will do it in the future, but it has to come naturally, I don’t want to force things. For now, I know my role in the band and I am completely cool with it.

Michaela: What do you think about the old music and the abcomming generation of music?

Giovanni: I took inspiration by the music of the past, especially by the 90’s and from the industrial music of the ’70s and 80’s, but since I moved to Berlin in 2014 I am influenced by a certain kind of techno and electronic music. I moved to Berlin exactly for this reason, for being contaminated by the sound of the city. Obviously, during these 3 years and a half, I found what I like most, that is Stroboscopic Artefacts, Raster Noton, Eaux just for naming a bunch of labels.

Regarding new artists that I found recently, there is Caterina Barbieri who plays modular synths in a melodic way. I really suggest to check out her work! 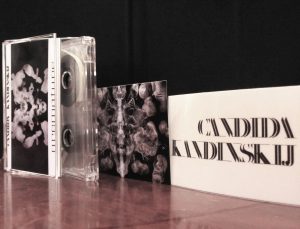 Michaela: What is the meaning behind your song “Hill”?

Giovanni: I like that you asked me this because usually people ask for the meaning behind Dobermann, which is also related to Hill.

The song Hill was written when me and my current partner broke for awhile in 2012, and the song talks about the moment when I realised my side of faults and when I felt her distance, but at the same time I became aware that the story wouldn’t been different because I was in a certain state of mind for certain important personal reasons and this is a fact, and if I would change the past I wouldn’t change any part of it and I would commit again the same mistakes that I did because it is a part of the process.

Michaela: When can we expect new stuff from you?

Giovanni: Honestly I don’t know, I just put aside Candida Kandinskij after 8 years because I felt the need to do it for giving voice to Giovanni De Benedetto. I’m working on new material, as I already did this year with PREMATURE 2017 – 2018, but probably all the things that will come out in the future will be released under my real name, visually and musically.

Again, it’s a part of the process.

Michaela: What kind of person are you, could you describe yourself in a few words?

Giovanni: Kind, honest, resentful, empathic, egocentric and sometimes I commit the mistake to take myself too seriously.

Michaela: How important is it for you how people react on you?

Giovanni: It depends who is involved. I am not a compliant guy and I don’t want to be liked by everyone at all costs.

Michaela: Who is your favourite Italian musician?

Giovanni: I can name three of them: Alessandro Cortini, Aquefrigide, Afterhours

Michaela: If your life would be a movie, what it´s Name?

Giovanni: Outside The Frame

Here you can write a few words directly to the fans!

In the era of apathy feeling is everything.

To Goth and Back – Die Oberherren veröffentlichen ihr neues Album

To Goth and Back – Die Oberherren veröffentlichen ihr neues Album